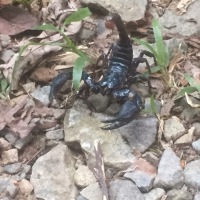 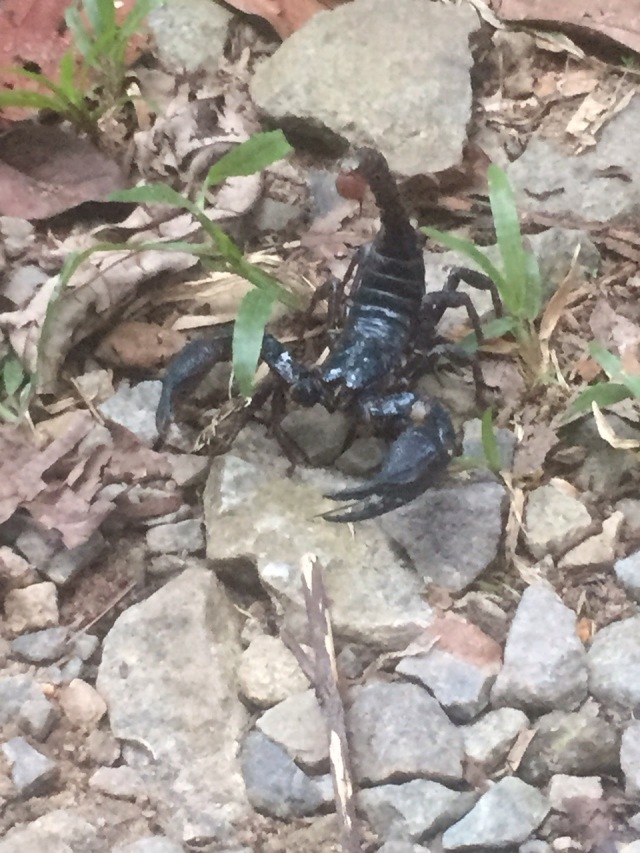 I’m kind of lost about how to begin a post about as awesome an animal as this, so let’s cut to the chase: this is, indeed, a scorpion.

If you live in the desert, this will not come as much of a revelation – I’m sure scorpions are plentiful over there, wherever that may be. In Singapore? Not so much. Even experienced bug-people report sightings of them as few and far between, and they are always confined to forested areas. Data on their occurrences within Singapore is almost non-existent; even the number of species present is not certain. (My hypothesis for the individual above is that it is a member of Heterometrus – otherwise known as the GIANT FOREST SCORPIONS – beyond that I yield to the experts.)

So, you may wonder: what else is awesome about this exquisitely infamous specimen of horror-movie terror? And why the heck is the photograph not as awesome as your usual ones?

I’ll get to the first question soon. And thank you for the flattery: the reason for the photograph quality is… I didn’t take it. Contrary to popular belief, I don’t spend all my time in MacRitchie taking photographs; on this instance I was sans my camera and so had to  beg another person to send their pictures to me (thank you, anonymous person, for that) because HOW COULD I NOT SHARE A FREAKIN’ SCORPION.

On to the awesomeness. Heterometrus is actually the family of the largest scorpions in the entire world (hence the name giant forest scorpion). But they probably won’t hurt you – keep your distance and nothing happens, worst case scenario you get a nasty rash for a week. This individual in question was understandably aggrieved by the numerous people crowding aroudn it (ok, there were like four), hence the aggressive position. We cautioned whoever we could to keep their distance but had to leave quickly because it was getting dark.

Even more awesomeness! They’re actually nocturnal, so it’s a stroke of luck we were wandering MacRitchie in the eventime, where they were just beginning to be active. (Which means, yes, you usually have nothing to fear if this sort of thing creeps you out.)

But if the Cross-Island Line goes through, for elusive creatures like this it’ll be lights out forever. Their burrows would be easily destroyed by a couple of bulldozers forging a path for the underground railway. And then, for under-studied insects of this kind, we’ll never know what we have until it’s gone.